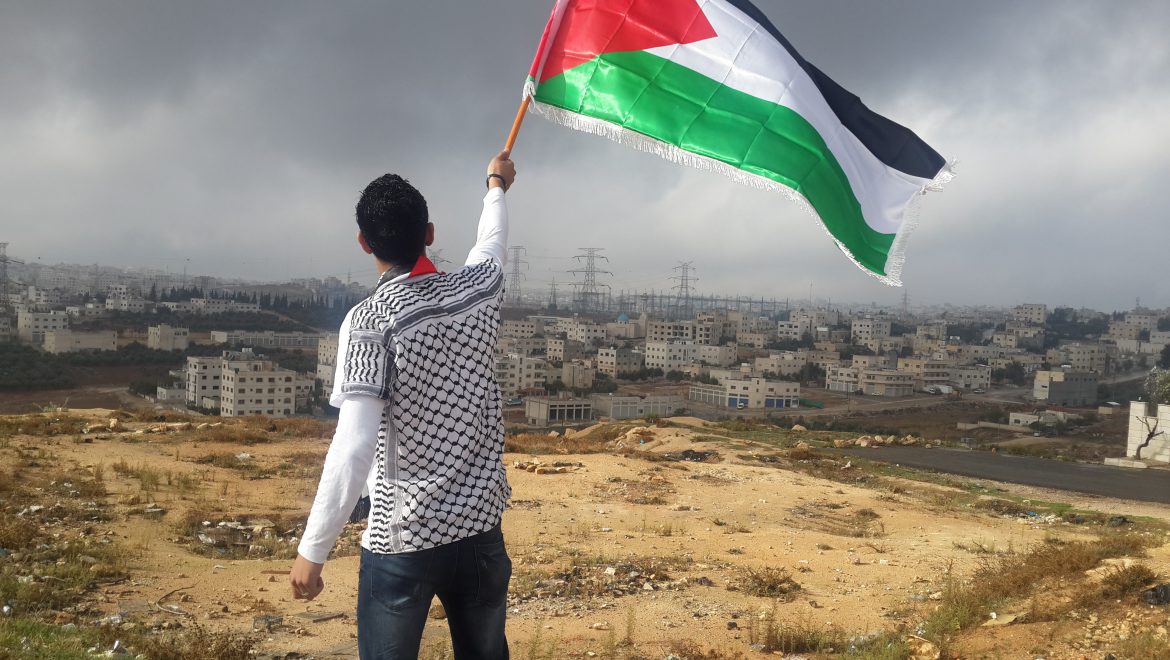 From Jewish Virtual Library, a project of the American-Israeli Cooperative Enterprise (AICE), this pro-Israel article presents the catalysts and nature of the First Intifada, emphasizing the role of false rumors against Israel in starting the protests and the inherently violent nature of the uprisings, against both Israelis and nearly 1000 Palestinians accused of collaborating.

False charges of Israeli atrocities and instigation from the mosques played an important role in starting the intifada. On December 6, 1987, an Israeli was stabbed to death while shopping in Gaza. One day later, four residents of the Jabalya refugee camp in Gaza were killed in a traffic accident. Rumors that the four had been killed by Israelis as a deliberate act of revenge began to spread among the Palestinians. Mass rioting broke out in Jabalya on the morning of December 9, in which a 17-year-old youth was killed by an Israeli soldier after throwing a Molotov cocktail at an army patrol. This soon sparked a wave of unrest that engulfed the West Bank, Gaza and Jerusalem.

Over the next week, rock-throwing, blocked roads and tire burnings were reported throughout the territories. By December 12, six Palestinians had died and 30 had been injured in the violence. The following day, rioters threw a gasoline bomb at the U.S. consulate in East Jerusalem. No one was hurt in the bombing.

In Gaza, rumors circulated that Palestinian youths wounded by Israeli soldiers were being taken to an army hospital near Tel Aviv and “finished off.” Another rumor, claimed Israeli troops poisoned a water reservoir in Khan Yunis. A UN official said these stories were untrue. Only the most seriously injured Palestinians were taken out of the Gaza Strip for treatment, and, in some cases, this probably saved their lives. The water was also tested and found to be uncontaminated.

The intifada was violent from the start. During the first four years of the uprising, more than 3,600 Molotov cocktail attacks, 100 hand grenade attacks and 600 assaults with guns or explosives were reported by the Israel Defense Forces. The violence was directed at soldiers and civilians alike. During this period, 16 Israeli civilians and 11 soldiers were killed by Palestinians in the territories; more than 1,400 Israeli civilians and 1,700 Israeli soldiers were injured. Approximately 1,100 Palestinians were killed in clashes with Israeli troops.

Throughout the intifada, the PLO played a lead role in orchestrating the insurrection. The PLO-dominated Unified Leadership of the Intifada (UNLI), for example, frequently issued leaflets dictating which days violence was to be escalated, and who was to be its target. The PLO’s leadership of the uprising was challenged by the fundamentalist Islamic organization Hamas, a violently anti-Semitic group that rejects any peace negotiations with Israel.

Jews were not the only victims of the violence. In fact, as the intifada waned around the time of the Gulf War in 1991, the number of Arabs killed for political and other reasons by Palestinian death squads exceeded the number killed in clashes with Israeli troops.

PLO Chairman Yasir Arafat defended the killing of Arabs deemed to be “collaborating with Israel.” He delegated the authority to carry out executions to the intifada leadership. After the murders, the local PLO death squad sent the file on the case to the PLO. “We have studied the files of those who were executed, and found that only two of the 118 who were executed were innocent,” Arafat said. The innocent victims were declared “martyrs of the Palestinian revolution” by the PLO (Al­Mussawar, January 19, 1990).

Palestinians were stabbed, hacked with axes, shot, clubbed and burned with acid. The justifications offered for the killings varied. In some instances, being employed by Israel’s Civil Administration in the West Bank and Gaza was reason enough; in others, contact with Jews warranted a death sentence. Accusations of “collaboration” with Israel were sometimes used as a pretext for acts of personal vengeance. Women deemed to have behaved “immorally” were also among the victims.

Eventually, the reign of terror became so serious that some Palestinians expressed public concern about the disorder. The PLO began to call for an end to the violence, but murders by its members and rivals continued. From 1989-1992, this intrafada claimed the lives of nearly 1,000 Palestinians.